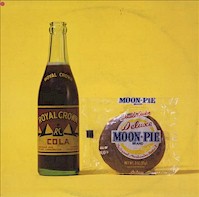 Mike Saporito's cover photo isn't a partcularly high minded, or complex concept - basically nothing more than a 12 ounce bottle of Royal Crown Cola and Moon Pie, but I have a deep fondness for the cover.  I'm guessing it has something to do with my Southern heritage (born and partially raised in Fairhope, Alabama), or perhaps the fact I'm old enough to have clear memories of indulging in RC and a Moon Pie lunches.  Life seemed to much simpler in those days ...

Posted by BADCATRECORDS at 1:19 PM