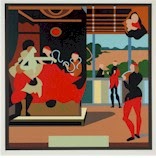 Okay, I'll readily admit the music on "Another Green World" is somewhat of an acquired taste, though the album has actually grown on me over the years.  The cover is was taken from a larger painting by Tom Phillips entitled After Raphael.  Painted in by Phillips in 1973, London's Tate gallery now owns the original.

This is one of those album covers where I'm at a loss to explain why I find it so appealing.  Maybe it's the childlike simplicity of the work ?   My wife would tell you simpleton is an apt description for my personality and behavior, so maybe that's why I identify with the cover.
Posted by BADCATRECORDS at 6:19 PM