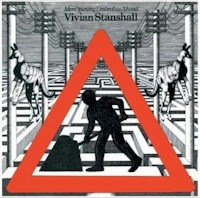 The late Vivian Stanshall is all but unknown to American audiences and his 1974 debut album never even saw an American release (it reportedly sold 5,000 copies before being deleted from the Warner Brothers catalog).  Musically it's a weird combination of English comedy and some of the most gut wrenching self loathing you'll ever hear - probably not something for the average top-40 listener.  If interested, you can find a more detailed description at: http://badcatrecords.com/BadCat/STANSHALL.htm

Anyhow, meant to invoke a traffic sign, Peter Till's cover is simply eye catching.  I can't tell you how long I've spent gazing at the cover.
Posted by BADCATRECORDS at 7:49 AM