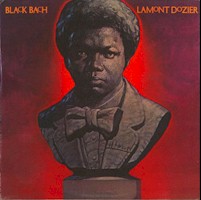 C'mon, you've got to admit there's something fascinating about this one.   By 1974 Lamont Dozier had been fashioning hits for other people for a decade. The man literally had a golden touch when it came to songwriting.  Against that backdrop you couldn't blame him for wanting to take a stab at a solo career (this was actually his second solo album).   I'm not trying to imply Dozier was suffering from a form of megalomania, but the Bach comparison was certainly pushing.   Regardless, I love the cover art.
Posted by BADCATRECORDS at 7:25 PM