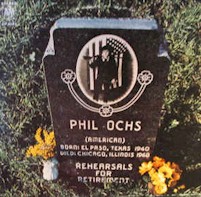 I'm no Phil Ochs scholar (they do exist), but based on what I know about the man, he had a difficult life.  He was certainly a talented singer/songwriter, but never seemed able to get out of Dylan's creative shadow.  By the time he was in his 30s Ochs personal life was a disaster, for a brief period he lived in the streets. Depression and mental issues plagued him (he was diagnosed as suffering from bipolar disorder).  Drugs and acute alcoholism certainly didn't help his cause.  Only 36, Ochs hung himself in 1976.

Against that backdrop, there's something quite disturbing about this 1969 release with a cover showing Ochs' tombstone with the inscription:

Posted by BADCATRECORDS at 2:47 PM