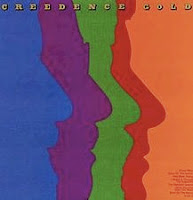 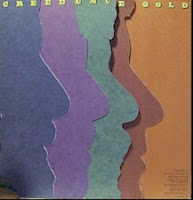 I looked around for a good photo that would show how cool the Tony Lane designed gimmick cover was, but couldn't find one that really showed it off.  Best I could find was the  photo to the left which sort of displays the cover's unique four profile flap design.  If you can't make it out, the cover features cutout silhouettes of the four band members under colored profile flaps. I've never bothered to figure out which profile belong to which member - I think the red one is John Fogerty's.  Someone out there will know which is which.  Anyhow, the clever (and costly) cover certainly wasn't something you would have ever expected from a label like Fantasy.
Posted by BADCATRECORDS at 7:11 PM