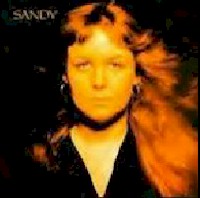 I'll readily admit I'm not a gigantic fan of English folk-rock bands Like Fairport Convention, early Strawbs, and Steeleye Span, but I make an exception for the late Sandy Denny.  There's just something special in her voice - not to sound hyper-sensitive, but the woman could sing a phonebook listing and make you sit up and take notice. Her voice is instantly recognizable and she managed to pack so much emotion into a song, you just had to wonder how a young English woman could pull that trick off.  That's high praise from a guy from Alabama.  From what little I've read about her life, Denny was a tough, if highly troubled woman.  I've seen photos of her where she looked like she could take care of herself in any brawl.  I'm not sure you would have considered her beautiful in the traditional sense of the word, but then that's one of the things that makes the David Bailey album cover so stunning.  Not only did Bailey managed to capture a stunning picture of Denny (she really did look gorgeous), but she looked peaceful, relaxed, and comfortable on the album cover.  It made for a stunning cover.

For anyone interested, the British National Portrait Gallery will sell you an unframed copy for about $20:  http://www.npgprints.com/image/675484/david-bailey-sandy-denny

Posted by BADCATRECORDS at 4:59 PM