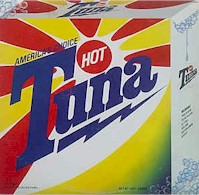 
Even if you're not a big fan of this Jefferson Airplane spinoff, you've got to admit that the cover to their "America's Choice" album was eye catching. Frank Mulvey's use of vivid colors and the striking lettering were clearly meant to mimic a box of laundry detergent (take that Andy Warhol).  There was just something very counter-culture cool here.  One of the last breaths of the San Francisco psychedelic lifestyle ...   Always loved the side panel "WARNING: THIS ALBUM TO BE PLAYED AT FULL VOLUME FOR MAXIMUM EFFECT"

Posted by BADCATRECORDS at 4:37 AM