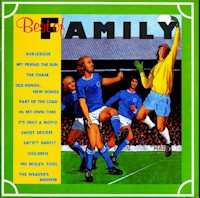 As far as I can tell, if you're English soccer isn't just a sport, rather it's almost a religion. No idea if Roger Chapman and the rest of the band were major soccer fans, but given their working class roots, it makes sense.  Any how the Byron Harvey album cover.was cute and the compilation featured most of their hits.
Posted by BADCATRECORDS at 4:31 PM