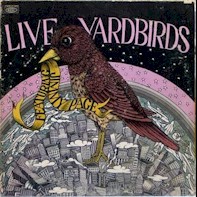 One of rock's most infamous albums.  Epic Records has released "Live Yardbirds Featuring Jimmy Page" at least twice (once in 1971 and once in 1976).  Both times Page threatened legal action over the crappy sound quality and both times the album was quickly withdrawn.  Anyhow, I'm more interested in the cover art (if you've ever heard the album the sound quality is simply abysmal making it easy to see why Page threatened a lawsuit).

Today he's widely known for his work in cardboard...  seriously.  One of the most interesting documentaries I've recent scene was  entitled Cardboard Bernini, describing the creation, exhibition, decay, and destruction of an enormous Trevi Fountain inspired cardboard project he built.

Posted by BADCATRECORDS at 5:19 PM